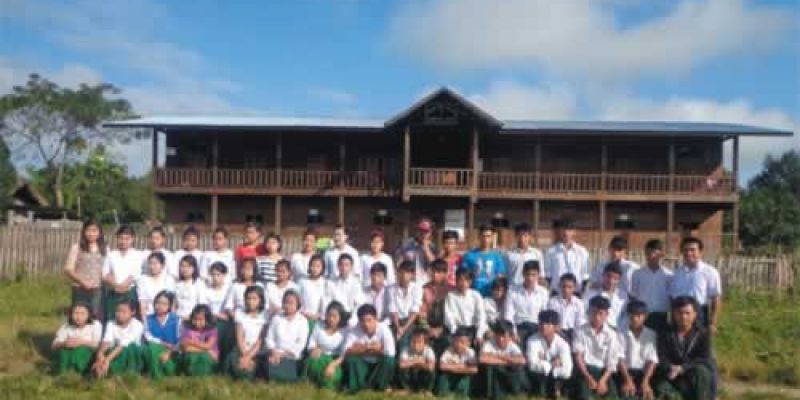 Hope for the Future

For many years, the Columbans have been sponsoring the Education Commission of Myitkyina and Banmaw Dioceses, in Kachin State, Myammar, in their provision of boarding hostels and schools in the remote areas, where war and poverty are widespread. The following is a report from the Coordinator of the Myitkyina Commission, Peter Naing Lin, on a recent visit to two rural parishes in an area up near the Northern border of China. It gives a snapshot of the extraordinary challenges faced by teachers, children and the priests, Sisters and catechists, trying to provide pastoral care in most difficult circumstances.

Nine of us got in a boat to begin a journey at about 10:15 a.m. on Wednesday, June 10, 2015. The boat was slow! By 5 p.m., the boatman got tired, so we put up for the night at an inn in Tiyan Zup village. The next day, we got to Layan village by the same boat. It was evening when we met my colleague Roi San’s father who gave us some food. We stayed at a priest’s house which was empty and a good place for us to cook.

The next morning Roi San and three volunteers left for Kachyihtu parish, but four other volunteers and I had to stay for another day to get a boat to N Htan Zup. Sometimes there is no boat for several days. Our group arrived there on Saturday evening; the next morning, we continued on foot to Umhta village on foot. This was the first hard day, but not yet the hardest we were to face.

The four volunteers began to smile and cry when we got to Umhta village at about 6:30 p.m. that night, for they all were assigned there as teachers. I spent another day there to observe the Umhta Sunhtu Middle school and meet teachers and the board of the school. I took some photos and had a little fun with the people there. Then I continued my journey to N Hkai village. One of the villagers accompanied me.

The two of us passed many mountains and valleys like we were on a military training or like Jesus carrying the cross up Calvary. This was truly the hardest day of the journey. The road was muddy and full of leeches, and the weather was both hot and wet. We got to N Hkai at about 7:30 p.m. on June 16.

The next day, I met the school staff and the school board. On June 18, I got another local man to accompany me to Lung Wang village, where we arrived two days later. After spending a little time there to rest, we walked for four hours to Chahkyi Rawng.

I decided to stay there for another day to meet the staff and school board. As usual people there were friendly and talked much. I was too tired to talk to every one of them, although I did what I had to do.

Then I had to continue my journey to another place, Bum Noi. One of the volunteer teachers there kindly accompanied me up to Bum Noi and N Htan Zup. At least I was able to ride a motorbike half way to Bum Noi!

The following Monday morning, I met some parents and the school committee and talked about the vision and mission of the school. Then I said, “good-bye…see you next time.”

We arrived N Htan Zup in the evening on the same day. This time, the road was too bad for a motorbike, which we fell off several times. But somehow we got there. The next day we boarded a boat for home, bringing to an end this difficult but memorable stage of the journey.

On September 2, 2015, Roi San and I made it to St. Paul Boarding house, driving motorbikes to Machan Baw from Kawng Kahtawng when the sun had already become very dim. There are 28 students here, none of whom are from rich families, so not all of their parents can pay the boarding fee. Students take turn cooking. Their lunch always seems to be porridge. Mostly they get fresh vegetables from their own garden. The water is clean and healthy enough. Desks and chairs are clearly not sufficient. Dormitories for both boys and girls are just temporary bamboo houses. Toilets are getting old, but the electricity is okay. These young peoples’ dreams are to be school teachers, lawyers, nurses, catechists, priests and Sisters.

On September 20, we went to Lung Sha Yang Boarding House where there are 44 students. The priest shared his difficulty in managing those students, many of whom are traumatized by the war. The dormitory and study halls are in good condition but not the dining room. The bathrooms and toilets are quite bad. They have two meals a day, but the meals are usually of poor quality. They have electricity but obviously no internet. The boarding house relies totally on the Education Commission for funding. There is no sign of the committee trying to move to selfsustainability. As it is, most parents are poor and uneducated farmers who can’t pay any boarding fees.

On September 28, we arrived at Kawng Kahtawng Boys’ Boarding House where there are 15 boys from different villages. Since many of them are from very remote areas, their learning process is slow compared to students at state schools. They take only two meals a day but never complain; the lights, though, are not bright enough to study at night. None of their parents can pay the boarding fee. They all have great dreams and totally rely on their priest.

We then moved to St. Francis Xavier Convent Boarding House where Sr. Teresa AH Myaw is helping the six students here. Sr. Teresa wants to add more students, but she is worried about how to fund them. The Education Commission presently pays all boarding costs including the boarding mistress’s salary.

Next, we visited N Si Yang Primary School on the afternoon of September 30. There are 42 students on the list here, all from surrounding villages. Their absence from school depends on the information they get about the fighting between Kachin Independence Army (KIA) and government troops which can happen at any time. Ten out of 52 families have fled to other places, and there will be more families leaving their homes soon. The school building, desks and blackboards are getting old. If there is more fighting, the school will have to close. Some rockets fell next to the school fence during the war last year.

The school is affiliated with the state school from Lung Sha Yang. Exam papers, report cards and teaching methods are provided from there. The Kachin Independence Army provides a sack of rice and some salt to each teacher every month. As a local contribution each family is asked to pay $5 and ½ sack of rice each year, but not every family can afford even this fee. The Education Commission provides a monthly salary to the three teachers as well as sport materials and some medicines.

All teachers are married, and their absences are frequent. There are three villagers elected to be the school committee. The school is the only hope of the villagers for their children’s education.

Finally, on October 2, we visited St. Michael Girls’ Boarding House where eighteen girls from the surrounding villages are studying. They go to daily Mass and prayers (as is the custom in all the boarding houses). Their parents are charged $200 per a year but only a few of them could pay it, so the Columbans, through the Diocesan Education Commission, have been paying it in full or part. None of the girls have dropped out or complained, although the building is clearly getting old and is too small for them. Their three meals a day are comparable to the ones they get at their homes, and they get fresh vegetables from their garden. There is intermittent electricity, and they share a generator with the boys’ boarding house. The Sisters run a kindergarten program during the day.

These young people all have great dreams, such as to be doctors, teachers, and religious Sisters.

Columban Fr. Patrick Colgan serves on the Society’s General Council and lives and works in Hong Kong. He frequently travels to Myanmar.