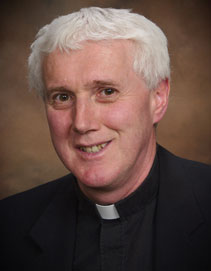 During the national convention of the Ladies Ancient Order of Hibernians (LAOH) in St. Louis two years ago, I encountered many participants who had a strong connection not only with my native country, Ireland, but also with various Columban missionaries scattered across the world. Those encounters gave me a deep sense not only of the length and breadth, but also the depth of that bond between this Catholic women's organization and the Columban Fathers; a bond that stretches all the way back to Bishop Edward Galvin, one of our co-founders.

Back in 1935, the LAOH made a promise to Bishop Galvin that it would provide ongoing spiritual and financial support to Columban missionary endeavors. Since then, it has faithfully and generously kept that promise. We are truly blessed by such friendship and loyalty, and strive to share that blessing with the poor who long for the fulfillment of God's dream in various countries around the world.

Since its foundation in the nineteenth century, the LAOH has continuously supported people on the margins of society who cherished the dream of a better life. Throughout much of its history here in the U.S., the LAOH provided greatly needed support to poor immigrants from Ireland who faced many hardships and obstacles, including discrimination because of their Catholic faith.

During its national convention in Atlantic City, New Jersey, later this summer the LAOH will look back at some of those earlier chapters of its history, and commemorate in a special way the painful struggle by the people of Ireland for liberation a century ago. However, it will not be satisfied to simply reminisce about the suffering and the heroism of the past; it will also acknowledge and lend its support to the many people who yearn for the freedom, dignity and peace of God's reign in our world today.

Since the LAOH is a women's organization, generally the national chaplain and I are the only men present among the several hundred participants at their national convention. As I looked around the hall during their last convention, I was spontaneously reminded of Jesus' question, "Who is my mother and my sister?"  as well as His response, "Whoever does the will of God is both my mother and my sister."

The prayers and sacrifices of those LAOH sisters and their predecessors have greatly sustained the lives and ministries of Columban missionaries during these past eighty years. Furthermore, these Ladies continue to make it possible for us to be ambassadors for Christ among the forgotten people of our world today.