Getting a Start in Life 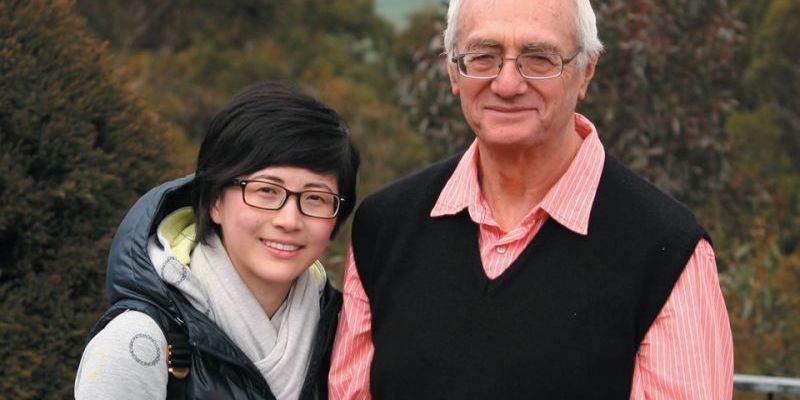 Friendship Is at the Heart of Being a Columban Missionary

Bishop Jin, the late bishop of Shanghai, who died aged 97 years in 2013, was Agnes Dong’s great-grandmother’s cousin. Her grandmother on that side of her family was a devout Catholic, but her other three grandparents were not Catholic.

Her grandmother went to Catholic schools in Shanghai, but her mother was brought up during the Cultural Revolution (1966 – 1976) when Chinese Christians did not practice their religion openly, so she was not brought up Catholic.

Agnes was born in 1990 in a time when there was freedom of religious practice in China. Aged six months and with some encouragement from her grandmother, Agnes’ parents took her to the church to be baptized on January 21, 1991, the feast of St Agnes.

The Shanghai cathedral was renovated following the Cultural Revolution and opened for public worship with the celebration of Christmas Mass in 1980. Agnes went to church as a child, but she noticed that those at church were either old people around her grandmother’s age or young people around her own age. Her parents’ generation was absent as they had not been introduced to religious practice during their formative years. However, since then some have returned to the public practice of their religious faith and others have joined the Church.

Columban Fr. Warren Kinne has been a good friend of her family since the year 2000. He got to know her mother at work where she edited material at the Catholic Church publishing office. Fr. Warren was helping with English language work. He was very patient and kind.

Agnes recently completed nine years of study in Adelaide, Australia, and is about to return to Shanghai to look for a job. She lived with the same Catholic family during her entire time in Adelaide. There are two children in her Adelaide family, a girl and a boy, now aged 12 and 14 years. Sharing family life with them has been important for her as she is an only child but has now had nine years experience of sharing family life with other children. Due to China’s one child policy she did not have brothers or sisters at home in Shanghai.

Of course, the main push for her overseas came from her parents, to whom Agnes is most grateful: “Not only did they supported me financially in the past nine years so that I could concentrate on my studies, more importantly, they encouraged and cheered me up when I was upset or feeling low. I am very thankful for all the sacrifices they have made to provide me with the opportunity to study in Australia and experience a different culture.”

Her family in Adelaide was most welcoming, and she insisted to me that being with them helped her become more sociable and overcome her natural shyness. Nine years ago, she assured me, that she would have hesitated to talk about her life but, thanks to this family experience, now is happy to do so.

In Adelaide, Agnes studied at St. Ignatius College and, for some art work in her final year, she won the Benjamin Young Artist Award in the Sterling Art Exhibition. She hopes the Australians like the photos of some of the art work she presented at that time.

After completing year 12, she studied for a B.A. in media studies at the University of Adelaide. Following that, she studied for an M.A. in business law and commerce. Agnes did well in a number of subjects at university and won prizes, especially in legal studies. She now feels both hopeful and confident that these years of study in Adelaide might help her get a job at home in Shanghai.

During her time in Adelaide Agnes returned home to Shanghai each summer so she did not lose touch with her family. She feels proud and happy to be moving ahead with her life but also apprehensive and a little unsure of herself. So much has changed in Shanghai. Adelaide seems to stand still in comparison with the rate of change in Shanghai.

Each year when Agnes returns to Shanghai she finds her friends speaking with new words and phrases. There are ever more new buildings in the city. When she left Shanghai to study in Adelaide, there were just a few subway lines in the city, and now there are at least fifteen. The population has been growing so fast; in 2009 Shanghai was home to nearly 18 million and by 2013 the figure had risen to over 24 million, 40 percent of whom are migrant workers from other provinces of China.

Agnes has been looking forward to going home for a long time. Despite all the changes, which at times leaves her quite confused, she just wants to go home and do her best in whatever job she may get and live peacefully with her family. Yet she knows there is more to life than that and she spoke to me of also helping others in need, as does Fr. Warren with the migrant workers and their children. She has her own personal dreams but also intends to do what she can to help others live out their own dreams.