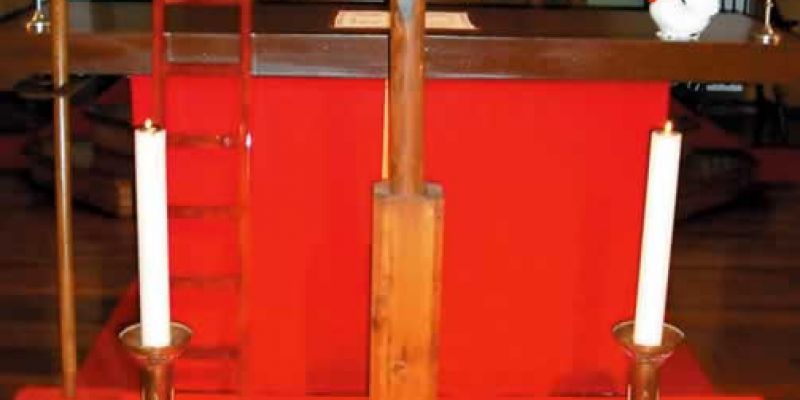 When I was a very young priest just out of language school in Tokyo, my Japanese vocabulary was somewhat limited! To give me confidence and help me get the message across I used many visual aids in my classes with those preparing for Baptism. Gradually as my proficiency in the language increased, I continued to use visual aids because I found that they conveyed the message of Jesus far more effectively. This especially is the case in the Japanese culture which emphasizes the concrete rather than the conceptual. And here I am 55 years later still using visual aids in my catechumenate, homilies and liturgies!

The Good Friday liturgy is one example. For the Adoration of the Cross there is quite a display. The centerpiece is a large crucifix. I found the crucifix in the sacristy store room. It was broken with only wires protruding from the plaster arms. A sculptor parishioner, only recently baptized, gave Jesus new arms. This repair work meant a lot to him. I had seen a crucifix from Ireland used during the persecution. On it was not only the outline of Jesus, but also depicted were the instruments of the Passion. Using this Irish crucifix as our resource we assembled various concrete objects. The women in charge of the altar flower arrangement plaited a crown of thorns.

In my carpenter’s workshop I made the scourge and a large pair of dice to depict those used by the soldiers to decide who won the seamless cloak of Jesus. From my carpentry kit we added a heavy hammer, three large nails and pincers (to take the nails out after Jesus’ death). Another amateur carpenter made a very realistic looking lance, a pole topped with a sponge and a miniature ladder (to take down Jesus’ body from the cross).

At first we had only a tiny rooster to recall Peter’s denial. Then a parishioner gave us an heirloom from her deceased father. It was a big, very much alive-looking rooster made in the atelier of the famous Japanese chinaware company, Noritake.

Our parish uses these visual aids on Good Friday during the liturgy which includes the Adoration of the Cross. At first we slowly read the relevant passages in St. John’s Gospel and the fourth Song of the Suffering Servant (Isaiah 52:13 – 53:12). The lights are then turned off, and only a spotlight on the area of the Cross remains lit. Then the parishioners come up in procession two by two while a chanter gently sings in Japanese those haunting liturgical hymns for Good Friday. The parishioners lay their hands on the Cross and commune with their Savior in silent prayer. It is a supremely sacred moment.

The purpose of a catechetical visual aid is to lead the viewer to a deeper faith truth. The aid must not become a mere transitory entertaining gimmick! An aid is a parable in the concrete. In other words, we do not concentrate on the actual wounds themselves, but rather on the love behind them. “By his stripes we are healed.” (Isaiah 53:5) That love is not just 2000 years ago, but a love that is alive and active for each of us today.