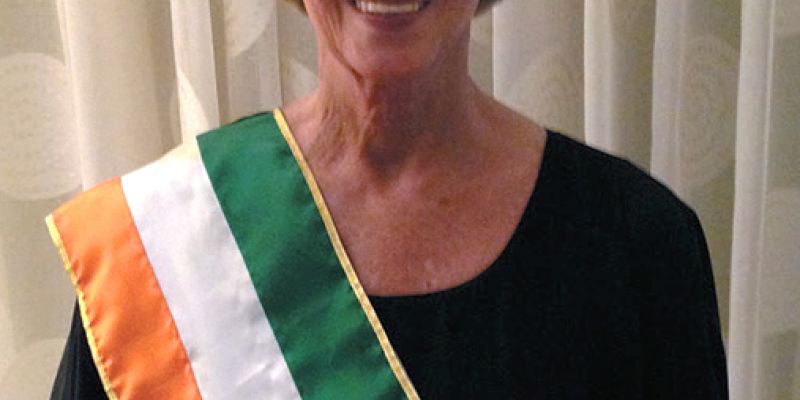 The Ladies AOH has changed in many ways over the decades, but still we hold true to our motto of “Friendship, Unity and Christian Charity.” We are pledged to God and country. The primary purpose of the LAOH was to protect young immigrant Irish girls who were coming to the United States, to assist them in securing employment, to give them the opportunity to be with their own kind, and to keep them from becoming homesick and discouraged. The preamble of our constitution states that the intent and purpose of the LAOH is to promote friendship, unity and Christian charity among its members, assisting the people of Ireland to establish an Irish Republic which shall include the 32 counties of Ireland, aiding the aged, sick, blind and infirm members and for the legitimate expense of the LAOH, including mission work and Catholic action. The ladies also foster the ideals and perpetuate the history and traditions of the Irish people and promote Irish culture. Our patron saint is St. Brigid of Ireland.

Membership requirements are as follows: You must be a practicing Roman Catholic woman, 16 years of age or older; AND

The LAOH membership is confined exclusively to practicing Roman Catholics who have complied with their religious duties within the past year.

At the 1980 National Convention, the Ancient Order of Hibernians (AOH) and the LAOH voted to fund a chair at the University of Notre Dame for the study of the history of the Catholic Church in the United States and the Irish contribution to that history.

At each National Convention, the order donates tens of thousands of dollars to the Columban Fathers and the Columban Sisters, the principal charities of the Order. We have been doing this for well over ten years, and we have helped to build over 60 mission churches around the world. These particular charities fall under the office of Missions and Charities, and it has truly been an honor to have served in this capacity.

The LAOH is in 28 different states around the country all of which have divisions and some have counties as well. The National LAOH website has all of the information about our order and about each office of the National Board.

Dee Ramp is the LAOH National Missions and Charities Officer.