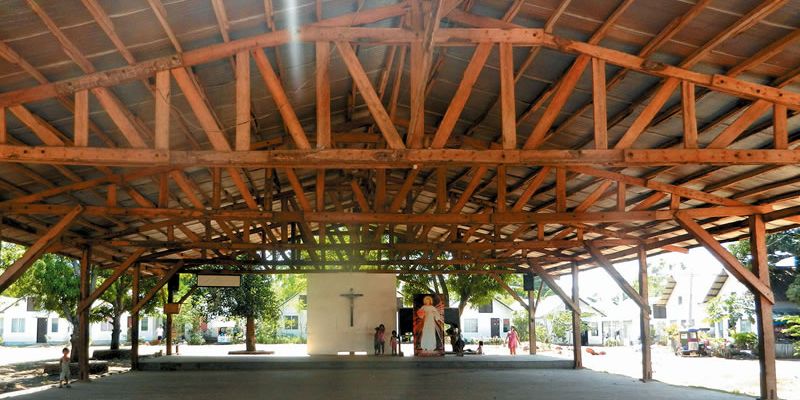 On the night of December 16, 2011, a sendong or typhoon struck the northern coast of Mindanao, the main southern island of the Philippines. Such was the ferocity of the typhoon that 12,000 families were left homeless while about 1,800 people lost their lives along the coastal areas of Cagayan de Oro.

It was the poor who had built their simple homes by the seaside who had suffered the brunt of the typhoon’s destructive force. After the typhoon abated, the homeless were given temporary accommodation in overcrowded and unhygienic shelters. The local government made some initial efforts to offer assistance to the homeless and injured but found itself hampered by bureaucratic disorganization and internal politics that made it impossible to respond adequately to the crisis at hand.

Columban Fr. Paul Finlayson, from Napier in New Zealand, recalls that soon after the typhoon struck, the Columban Superior of the Philippine Region, Fr. Pat O’Donohue, wanted to respond to the crisis but the needs of the typhoon’s victims were too much for any one person or group to handle. He says that in general the local Church was slow to respond because it too was affected by the typhoon. Eventually, the different religious orders and missionary congregations working in the affected areas in Northern Mindanao realized that in the face of the generalized state of official governmental and ecclesial paralysis that was prevailing in the typhoon’s aftermath, the best way forward was to join together in a common effort to relieve the suffering of the homeless victims of the sendong which had left thousands of already poor people entirely destitute.

Fr. Paul, who was the parish priest of Barra Opol parish near the City of Cagayan de Oro at the time, was asked by Fr. Pat to get involved in the process of finding a solution for the victims of the 2011 typhoon. In May 2012, the Columbans working in Cagayan de Oro diocese joined with the Sacred Heart Fathers to respond to the most pressing needs of the typhoon victims. Soon after a joint meeting including the Blessed Sacrament Fathers, the religious Sisters of the Poor Servants of Divine Providence, the Marian Fathers, who have a Shrine of Divine Mercy in the diocese, along with the Columbans and Sacred Heart Fathers, was held in Cagayan de Oro. This religious consortium made the decision to join together and begin a project to provide low cost housing for these homeless families.

The first step was to buy land. By pooling their financial resources together 7.3 hectares of land were purchased for 22,543,400 pesos (1 million pesos = approximately $21,276 U.S.) near Fr. Paul’s parish of Barra Opol. The next step was to begin construction of the houses that would form what was to become known as Mother of Divine Mercy Village. Fr. Paul recalls that the local government offered to pay 70,000 pesos towards the construction of every house built leaving the religious consortium the task of finding a further 65,000 pesos to complete the construction of each and every house. The task seemed daunting!

Eventually, other communities like the Stigmatans and the Religious of the Virgin Mary along with the original organizers of the project as well as other individuals such as Columban Fr. Leo Schumacher in Japan and Fr. Gill Escalante, who is the chaplain to the local Chinese Catholic community, responded generously, and gradually the village consisting of groups of houses constructed with an iron frame and inner bamboo partitions and cement walls began to take shape. Other Columbans in the Philippines took a personal interest in the project and contributed to its construction.

Funds raised from donors to the Columbans’ Columban Overseas Aid Fund (COAF) program in Australia and New Zealand provided the money necessary to build the water and drainage systems along with the water tanks and road networks that now make the village a going concern. Today a total of 551 houses have been built with more to come.

At the beginning of 2016, Fr. Paul decided to hand over the running of his parish in Barra Opol to fellow Columban Fr. Enrique Escobar from Peru and dedicate himself full-time to bringing the housing project to completion.

Fr. Paul says that Mother of Divine Mercy is very much a work in progress. While admitting that such things as a new food market and extra drainage and water canals need to be built and installed with a projected cost of approximately $150,000 U.S., Fr. Paul has thrown himself into the task of providing for the spiritual welfare of the new inhabitants of the continually expanding village. He has made the village’s multipurpose center his base, where he is in constant liaison with the program managers, teachers and social welfare workers who are also involved in accompanying Mother of Divine Mercy Village as it continues to grow. He says that as the village grows and more families decide to make it their home, the more need there is for counselling and spiritual guidance. Since many of the new inhabitants have arrived from all over Northern Mindanao and have never known each other previously, building community is an urgent necessity. In order to promote a sense of community every new arrival is asked to participate in a course on community living and values over nine weeks on Wednesday nights. Even though the village has no designated chapel so far, an open air shelter doubles as a church on Sundays where Fr. Paul and other priests who visit the village on a temporary basis celebrate Mass as well as baptisms and marriages.

Fr. Paul who has spent over 30 years as a missionary in the Philippines is finding the challenge of responding holistically to the families whose lives were ravaged by the typhoon a new opportunity to live out his missionary vocation. Not only is he literally building a community from the ground up by helping to organize the construction of the very houses the village’s residents live in, but also he is actively involved in forming a new and vibrant community, spiritually and morally, among people whose lives seemed to be destroyed by the forces of nature.

As St. Paul once said in his letter to the Romans (8:28): “God turns everything to our advantage when we love Him.”