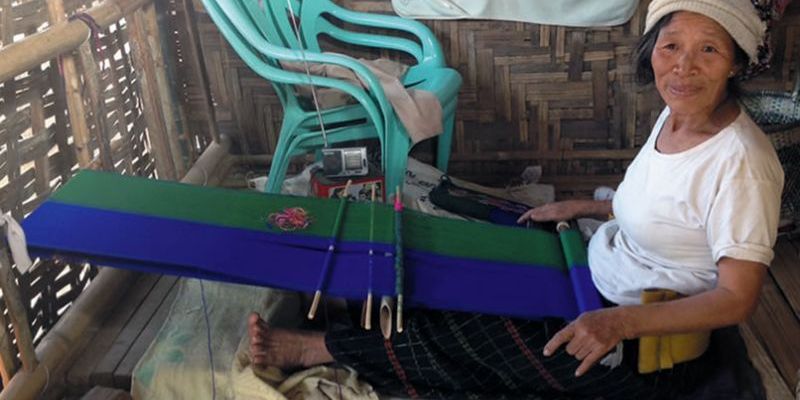 In late January 2017, Columban Fr. Pat Colgan (General Councillor with responsibility for Myanmar) and Columban Fr. Jovito Dales (the Society's Bursar General) visited boarding houses and internally displaced persons' (IDP) camps which the Columbans support in Myanmar. In the diocese of Banmaw, of the three boarding houses, based in Banmaw town and exclusively for IDP young people, we heard that 31 students passed their Tenth Standard State exams (equivalent to college graduation). One alumnus is now the tutor for other young refugee men, another is a firefighter, and yet another a chemist graduate at Banmaw University. The male students sang us a lively self-composed Kachin song which expressed their thanks to our Columban benefactors as well as their plea for continued support and guidance from us.

Two of them then gave testimonies which I, for one, found very touching.

Luka Maru La Ja is from ZauBung parish, near the Chinese Border. In 2011, his family was moved to Namkham due to the upsurge in fighting. As an IDP, he requested to come to Buduza Boarding House. After three years study there, he returned to his village but saw many of his peers with no education, already addicted to drugs or alcohol.

Luka decided to return to Buduza to continue studying. He is very grateful to this community for helping him to know God, to know love, and to receive an education. His dream is that, as soon as passes his State exams, to go to university to then get a job, either in the church or an NGO, to help give an educational opportunity to other young people.

Mary Maran Seng Ja was the first student at the Buduza Female Boarding House. She joined it as someone who had failed her exams but wanted to try again. She is the eldest in her family and feels sad about their life in the IDP camp. Although she tried very hard to gain a distinction in her Tenth Standard, at least she passed the exams. She sees so many of her peers with no education and no future and this encourages her to motivate them to reach out for the opportunity that the Columban donors have graciously offered.

Fr. Jovito said that since this was his first ever visit to Myanmar, he has been deeply affected by the testimonies of students, both at Columban Fr. Neil Magill's Higher Education Center in Mandalay as well as in Banmaw. He admires their persistent dream and efforts to educate themselves despite all the harsh circumstances of war. He encouraged them to keep dreaming, to keep thinking big, "keep repeating those exams until you get the mark you know you are capable of!" Fr. Pat then mentioned how as a young Irish person, he took his government provided education for granted. Now he sees in Myanmar so many young people choosing — often at great sacrifice — to learn. He told them that they—not Aung San Suu Kyi (State Counsellor) or any other politician — are the real leaders of both their Kachin State and the entire nation.

Nelson Mandela was always convinced that education was the only force that could ultimately break the chains and shackles of the past. Learning is much more powerful than guns, hatred or war. Fr. Michael Tang Gun, Caritas Banmaw Director, on behalf of the students, thanked all Columban missionaries and benefactors for this tremendous window of opportunity they have opened for the poorest but most eager Kachin young people. Lifting their level of education will lift their whole families and communities up too.

On the following day, we paid a visit to Maina Refugee Camp. This is one of the largest in Kachin State, now holding 266 families (1,355 persons), due to the sudden arrival of 182 new IDPs in Dec 2016. The Burma Army have been forcefully occupying new swathes of Kachin territory under the guise of neutralizing Kachin Independence army posts. The IDPs caught in the middle of the shelling had to run for their lives. The majority of the IDPs are old people, women and children, as many of the men would be involved in the war. There are 375 IDP students, and those doing 9th or 10th Standard public examinations are 74.

Food rations had already been reduced by 30% by the funding nongovernment organizations (NGOs), and when the new wave of refugees arrived, the local government only gave one week rations. Since then Caritas and the parish emergency team haven't been providing food assistance. There is a big need for an emergency vehicle in the camp, which no agency seems to want to fund. It would cost $2,500. The Columban-supported Diocesan Education Program has provided training and the salary for nine boarding masters/mistresses who provide after school tuition to children from grade 4 to 8. Recently the local government was running around installing electricity in the main reception/clinic area- something the IDPs had been requesting for six years! There is a severe water shortage in the camp in this dry season. There are twelve shallow wells, but despite written and posted camp rules, women often wash clothes or residents bathe near the wells, dirtying them further. In fact there is a large scale mental health (depression, antisocial behavior, drug and alcohol use) issue in the camp. The camp leader, who is also a Catholic catechist, does his best to keep families and particularly young people faithful to communal prayer, something very important to Kachin culture, but these are clearly not normal circumstances. The multipurpose hall, used for childrens' night study, prayer meetings and social/cultural activities, is in danger of falling down and being unusable. He humbly asked if I could find help for this.

Visits like these help me to appreciate, again, the generosity of our donors as well as the hope, "pleading hope," that many young, and older, people have towards the Society, not just in Myanmar but in many other countries. As a further group of Columbans arrive for language study and mission in Yangon this month, our prayers are with them.