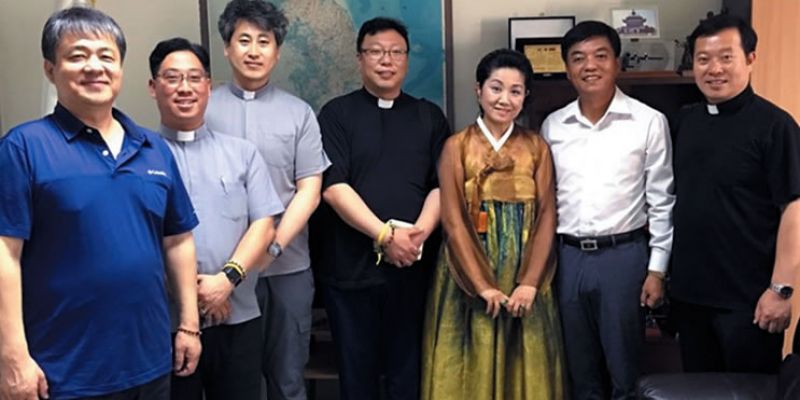 Fr. Thomas Nam, second from leftIn May 2016, I went to Bangkok, Thailand, with other priests and a brother in order to visit the Korean Embassy and the Korean Catholic Community there. We were looking at how we might help North Korean refugees with the help of the embassy and Catholic community. Among the high number of refugees from North Korea, 90% of them stop briefly in Thailand.

The vast majority of North Korean refugee/migrants living in South Korea call themselves Christians. Surveys taken in the early 2000s showed that almost 75% of them were converted predominantly to Protestantism. As a way of seeking solace, living morally and building new social networks within South Korea—and even receiving cash subsidies from the state—most of those who settle south of the demilitarized zone continue to depend on churches in their daily lives. It is interesting to ask the question: why do most defectors choose to be Protestant over other denominations and faiths?

The origins of the recent wave of North Korean converting to Protestantism dates back more than twenty years to the devastating famine that killed an estimated half a million people, perhaps more. North Koreans call this period the "Arduous March." Fleeing across the border to China, the first Chinese word tens of thousands of North Koreans learned was jiaohui, meaning church.

Many headed towards the brightly lit crosses that dot the skyline, particularly in China's ethnic Korean prefecture of Yanbian, which lies just across the Tumen River—the most popular and shortest crossing point between the two countries. Among those that stay in China, some remain for years working and studying, particularly in Yanji, the main city in Yanbian. Others move on to some bigger cities or else travel towards Mongolia or Southeast Asia so as to later defect via the various South Korean embassies. Thailand is one of the major countries where many North Korean refugees stay before entering South Korea.

The percentage of North Koreans who convert to Christianity once they flee has dropped sharply since the famine, from about 85% in the late 1990s to less than 75% in the early 2000s, and to even lower rates today. Upon arrival in South Korea, North Koreans are sent to the Central Joint Interrogation Center, where authorities verify they are not Korean or Chinese spies. Each defector must then pass through Hanawon resettlement center, where they receive instruction on how to live in the bustling, capitalist south. In this center, Protestant, Catholic and Buddhist religious services are offered. In fact, one of my new ministries is to offer religious service in the Hanawon center.

Some observers and North Korean refugees often note (with cynicism) that newcomers in Hanawon typically prefer Protestants to other religious groups because of the quality of snacks and gifts distributed at the end of each Sunday service. Protestants have invested more time and money compared to other religious groups in a bid to reach these new arrivals. Unfortunately, much the same thing occurs with religious services in the South Korean military.

After three months in Hanawon, defectors receive South Korean identity cards and are then resettled in low-income housing. From that point forward, they are expected to adjust to the South Korean way of life, including its hypercompetitive school system and job market. After the state, it is the Protestant Church which offers the greatest number of benefits to these newcomers.

For some, troubling similarities exist between forms of church worship and the adulation enforced inside North Korea in the name of the ruling Kim dynasty. Instead of the Bible, North Koreans must study Kim Il-sung's "Juche" philosophy and religious testimony and confession can seem like the self-criticism sessions every North Korean faces at home. Some converts become disappointed when they encounter discrimination by "superficial believers," those who are just in it for the benefits, or when they begin to believe that regular prayer makes little impact on the WWW.COLUMBAN.ORG February 2017 9 deprivation and persecution inside North Korea.

Many of the refugees later claim leadership roles within the church, evangelizing other North Koreans and thus moving beyond their secondclass status as beneficiaries of welfare in the south. The Protestant Church, much less centrally organized than the Catholic Church, has always been far better positioned for such a task. Catholicism is much less visible among North Koreans once they reach the south. Recent surveys have shown that just 1% of defectors regularly attend a Catholic church even if they seem to be more satisfied with the less aggressive approach to evangelism.

The Catholic Bishops' Conference of Korea runs the Committee for the Reconciliation of the Korean People, which offers nationwide support for defectors. The church should, I think, recruit North Korean laypeople to lead regional committees with support from South Korean clergy, catechists and other laypeople. In short, understanding North Koreans as human beings offers a better solution than wooing them with gifts. Like anyone, North Koreans tend to observe and follow what people do in practice rather than trust what they say. This is also an approach that helps create what most Koreans dream of: a cultural contact zone creating a small-scale reunification between north and south.

Author's Note: I am heavily indebted to Jung Jin-Heon and his article "Exploring Why Most North Korean Migrants Choose to Be Protestant."