People Were Thirsty for God 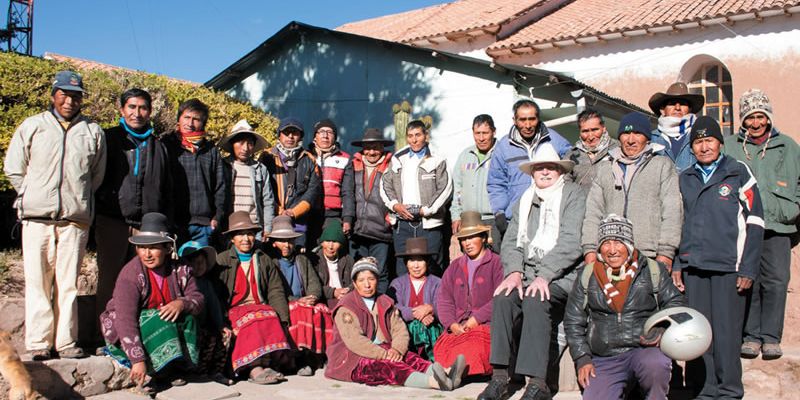 A Missionary for the Andes of Peru

The tall elderly man leaning slightly on his cane, stands out among the people of the Andes. Most Andean folks reach only to his shoulders, and his white and ruddy skin, burned by the cold, contrasts with the coppery skin of the local residents. But other than external appearances he is inserted perfectly in the community. He is almost a legend in the area. Everybody knows Father Pablo, children and adults, and speak to him either in Quechua or Spanish in the parish of Santiago Apostol (St. James Apostle), in the town of Yanaoca where he makes his home.

Yanaoca is at 4,000 meters (13,000 feet) above sea level. A good paved road will take you there in approximately two hours from Cusco, tourist capital of Peru. But Yanaoca is “another world.” It is a town of extremely poor peasants and small farmers. The scenery is very beautiful, yet desolate. But here is where 30 years ago, Columban Fr. Paul Prendergast, a native of New Zealand, decided to begin a new mission.

One morning during my visit to Yanaoca, Fr. Paul and I sat in the courtyard, under a weak sun, in an attempt to warm up from the frigid house, and he recounted the story of his missionary experience.

In 1966, Fr. Paul, then three years ordained, was sent to the Columban missions in Lima, Peru. He said: “I had no idea if Lima was in the Andes or at the coast, but I knew that most in 1966 were considered Catholics.” Upon arrival in Lima, he studied Spanish for about three months and then was assigned to the parish of St. Matthew the Apostle where he worked for thirteen years.

“People were happy to be Catholic and wanted to know more about their faith. I realized that almost all of our parishioners were not from Lima, they were from the Andes. My parishioners used to invite me to visit their native villages, and once I went with them to a small town in Ayacucho. When people found out that I was a priest, they immediately asked me to say Mass. The news that a priest had arrived spread out very fast and people came from everywhere, far and near asking for Mass, Sacraments, and blessings. I thought, ‘people in Lima need priests, but even more in the Andes.’ Some people had not seen a priest for more than ten years, and their faith was sustained by their religious traditions. When I returned to Lima, I formed a missionary team with a group of fifteen men and women and for nearly ten years we went every year for two or three weeks to different villages in Ayacucho. People were thirsty for God.”

The experience of those short term missions convinced Fr. Paul that the Andes of Peru were a missionary territory. Peruvian governments had neglected the Andean and Amazon regions; and even though Lima, the capital and all the coast of Peru have their good share of poverty, in most of the Andean towns the poverty is combined with isolation and hardly anything has progressed in the last 50 or 100 years depending on the area. After working thirteen years in Lima, and spending a short period in his homeland of New Zealand, Fr. Paul returned to Peru to work in the Andean mountains. The Prelate of Sicuani, Cuzco, Alvaro Quinn from Canada, invited Fr. Paul to work in his diocese, and Fr. Paul has been working there for the past 30 years.

While he had very devoted and generous parishioners in the sixty towns and villages under his care, their chapels, the religious centers of the towns, were falling apart. People fabricate mud bricks for the walls, but they never had enough money to put on the roof. Donations from Columban benefactors started to come in, and each year three or four towns put on the roof their chapels. Now all the towns have one chapel and some up to two chapels in a village. Local municipalities began to help with the floor, furniture, etc. For large structures, Fr. Paul asked Catholic institutions in the U.S. and Germany for help, and he was able to rebuild four large colonial era temples.

In Peru, the 1980s and 1990s were violent years dominated by two large terrorist groups: the Shining Path and the Tupac Amaru revolutionary movement. It was a time of great suffering for the whole country but especially for the already oppressed people of the Andes. Fr. Paul spent those years with his people although he was under death threats to leave the area. His voice took on an angry tone remembering those years:

“The time of terrorism was terrible, horrible. Nobody could say anything. We were traveling by bus, and you dared not say anything because you did not know if the person by your side was a terrorist or not. Our people survived this time, because they are quite strong. The farming work is very difficult in these regions and makes people stronger physically and spiritually too.”

He had strong words for what he called a “true ecological terrorism.” “Today the large foreign companies are doing great damage to the area. A true ecological terrorism. After a few years of mining work in the area, nothing grows. We have gold and copper mines, and the mining companies that have worked here, have left the river dirty, the land itself is not clean, it is poisonous, and the children get sick.”

Even though the community had hard times, things have improved much in Yanaoca in the last 20 years. There are paved roads for all the towns and districts of the parish. Goods are no longer carried on horseback but on trucks. A young Columban priest from Korea, Young-In Kim is now the pastor and following in Fr. Paul’s footprints, serves the people with love and generosity. Nevertheless young people are still leaving after finishing high school. They see no future for them there. They do not want to be farmers and live (or survive) on small pieces of land. The nuns that once were their best pastoral support have left the area because of diminishing members in their religious communities. I was wondering myself how long the Columbans would be able to staff the parish, so I asked Fr. Paul what he thought would be the religious future of this area. He was strident in his response:

“The church in this area would survive by the laity. There will be no priests or religious who can take care of many parishes. The church needs to be more open to the laity who wants to do something. There are even priests who do not want a layperson to speak in the church or a woman to get near the altar, not even for a reading during Mass. The Church has to change drastically. Our bishop will continue to insist on preparing more lay people for leadership. The church will continue to exist and would thrive into the future wherever the laity is allowed to work.”

From the beginning of his missionary life in Lima and continuing until today, Fr. Paul has worked with the laity empowering them to live their missionary responsibility.

Today every village in the parish of Santiago Apostle in Yanaoca has a lay person, male or female, who baptizes, opens the church or chapel on Sundays, and presides over the Sunday service, which includes a reflection on the Mass readings of the day. Each month these community leaders or catechists meet in Yanaoca for a weekend to share about their work and continue an ongoing formation.

Fr. Paul certainly has done his part for the future of the church in the Diocese of Sicuani and for the large parish of Santiago Apostol and the people of Yanaoca.