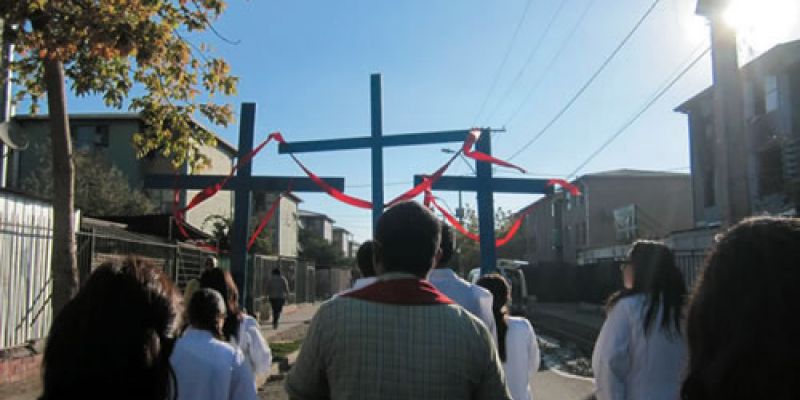 There's a Thief in the Church!

It was about three in the afternoon on a Tuesday. I was seated at my desk in the parish office chatting with a young couple who had come to ask for baptism for their newborn baby. As parish priest of the 90,000 parishioners of San Matias parish on the southern periphery of Santiago, Chile, a large part of my day was spent listening to the concerns of those who came to see me.

All of a sudden, I heard the parish secretary shouting, "Thief! There's a thief in the church. He is still in there." I jumped up, ran out of the office and into the church. And there he was, trying to help himself to anything that would have any monetary value.

The parish of San Matias comprises the main church where the parish office is located and nine smaller churches spread out across the area. This is a poor area with high incidences of unemployment, drug trafficking, domestic violence, suicide, despair, imprisonment, environmental degradation and family breakdown.

There are problems with malnourishment, a high dropout rate from school and little access to health services. Many people have no computer access to be able to prepare a job resume or fill out online forms needed to apply for services. The majority of our parishioners live in overcrowded conditions in government-built apartments and houses, the average size of which is a mere 36 square meters (118 feet).

We have only one police station in an area where an estimated 200,000 people live. Of course, police coverage in our area differs significantly from that of middle class areas in the same city. Seeing the thief, I ran into the church and headed towards him. He tried to escape through the hole in the wall that he had made in order to enter. But just before he made his escape I tackled him around the legs. He fell to the ground with me on top of him. Being a Fijian who had grown up playing rugby certainly was a big advantage in this situation! I think the thief was surprised that the parish priest had tackled him so quickly and effectively.

From the floor of the church, I called out to the parish secretary to call the police, while I continued to hold the thief down. He was about 30 years old, and I sensed that he was a drug addict. As I continued to pin him to the ground, while waiting for the police to arrive, he kept repeating to me, "Father, have mercy on me. Have mercy on me, please Father."

Being in a poor area with a high crime rate, all ten churches of the parish, every evangelical church, every school in the area, every neighborhood center, every hall, every sports club, every small shop and business, every health center and everyone's home, are all subject to robbery from drug addicts looking for quick cash to buy drugs.

We have had many break-ins in our churches. Hardly a month goes by without one or two break-ins. Chalices, patens and metal crucifixes have been stolen. Tabernacles have been smashed, and the Blessed Sacrament thrown on the ground. We have had lectionaries, missals and hymnals stolen. Liturgical vestments such as chasubles, stoles, albs, cinctures and the acolytes' albs have also been stolen. Sound systems, microphones and speakers are especially sought after. Most of these items are now kept in private homes for security reasons and brought out for Sunday worship.

I continued to pin down the thief waiting for the police to arrive while all the time he continued to plead for mercy. After waiting for around 30 minutes, I decided I had no option but to release him. He thanked me, got up and ran out. I watched him climb over the fence and was then surprised to see a rather fancy car appear out of nowhere to collect him and drive off.

In discussion with people in the area who know "things," and putting two and two together, it seems that our thief would also have been a victim in another sort of way. He most likely would have been a school dropout, uneducated and unemployable. In desperation he would have turned to drugs and soon become addicted. He probably owed money to these unforgiving drug dealers. They must have offered him a solution to pay back his drug debt by driving him around to different locations where he could break-in and steal items and so pay back his drug debt. If he was caught by the police it did not matter too much, because as a human being he was expendable, and there are plenty of others in the same desperate situation.

The police arrived about 30 minutes later. I expressed my frustration and annoyance to them, but I know that they are overworked and understaffed.

This incident helped me reflect on the importance of our parish reaching out to those in need. It helped me realize the importance of our pastoral work in the prevention of substance abuse and offering the addicts opportunities for rehabilitation and the hope for a new life. Our parish needs to continue to help those in crime and addiction to turn their lives around.

Columban Fr. William Lee comes from Fiji. He has spent the last nine years as Parish Priest in Chile and now has returned to Fiji to work in seminary formation for Columban students.