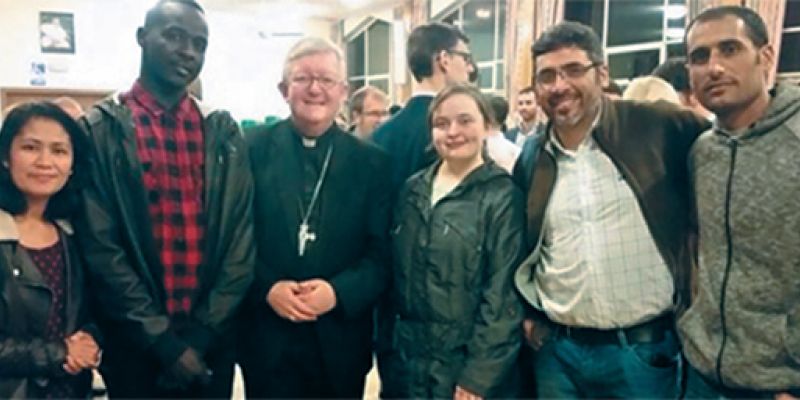 Editor’s Note: In November 2015, Julia Corcoran spent a week with Columban lay missionaries from Chile and the Philippines who are working in Britain. The following is her account as told to Columban Fr. Denis Carter.

I had been warned before I arrived that it could be a tough week emotionally. Based in Sparkhill, Birmingham, Britain, the lay missionaries are involved in different ministries with migrants, and with intercultural and interfaith initiatives.

The week began with a chance for me to get an overview of the work by attending a monthly meeting in which the Columbans (both ordained and lay) have an opportunity to reflect and share on their missions. This was a fantastic experience for me to meet a number of Columbans and learn from them as well as reflect upon my own life.

After the meeting I went home with two of the Columban lay missionaries, Mauricio and Nathalie, who are from Chile and are married and have two children. Mauricio is the current coordinator of the lay missionaries in Britain. The whole family made me feel very welcome and gave me opportunities to sit with them, share meals and reflect on my experiences throughout the week.

On Tuesday morning I went with Nathalie to the mother and toddler group that she helps organize. This project provides both an opportunity for the mothers and toddlers from a variety of backgrounds to socialize as well as an opportunity to learn and improve English. I enjoyed my time at this group, especially when they sang nursery rhymes that I sang when I was little. It brought me back to my childhood! I learned the importance of socializing at a young age, the importance of teaching young children the ability to share (there were a few fights over the musical instruments during the singing) and the importance for mothers to have some time with other mothers. There is a universal bond in motherhood that creates an understanding whether you speak the same language or not. Watching these women interact despite their different backgrounds demonstrated this to me.

I then went with another lay missionary – Rose, from the Philippines – to a project where women who are seeking asylum or who have refugee status come together and meet weekly to socialize with each other and also have the opportunity to discuss a particular topic. For example, the week before I arrived they had been discussing female genital mutilation. The week I was there they had a visitor who was writing her Ph.D. on experiences in detention centers. It was particularly eye opening as the women were completely honest with this lady about their experiences of detention centers which I hardly knew anything about beforehand. The stories the women shared were shocking. I don’t think I would have ever had the chance to hear their stories in any other situation.

In the evening Rose, Mauricio and myself went to a prayer service for asylum seekers and refugees led by the Archbishop of Birmingham in St. Chad’s Cathedral. Afterwards we met a variety of people including a man from Syria who had just been granted five years to stay in theUnited Kingdom on that day. It was a wonderful moment to share with this person who is now hoping that his family will be able to join him. He was invited to the St. Chad’s Sanctuary in order to get food, clothes and other things he might need while he is settling into the U.K.

On Wednesday, I moved from Mauricio and Nathalie’s house to the house where the three lay missionaries (Rose, Ger and JayJay) from the Philippines live. While I was with these three wonderful women I felt so welcomed and definitely overfed! They had a saying, “Eat more while you still can.” They would say this at every meal to make sure I had had enough food. They’re also such happy people with a lot of singing and dancing particularly at breakfast. I learned a lot from these three, particularly about missionary work – the good times but also the struggles.

The next day I went with Ger to a place where they teach English to people who want to learn it. As I helped one woman I realized English is not easy. You have a rule, and then the rule has exceptions and silent letters. I’m currently learning Polish, so I understand the struggle of a new language and was impressed by the level of skill the woman I was teaching had for English. This project helped me to realize how fortunate I am that I can choose to learn a new language and am not forced to because I have had to leave my country behind. One of the things I learned over the whole week is that language can be a real barrier for some people to feel a part of the community.

In the evening I joined Nathalie in the Hope Project garden to meet people who have moved to the U.K. for a variety of different reasons. The idea behind the project is to create a community by building a garden together. The group I met are a fantastic community, meeting weekly to share their news, both good and bad. They celebrate together and are sad for each other. They had so much enthusiasm for their gardening, and I felt part of the community for the evening.

On Thursday morning I went with JayJay to a church where the lay missionaries run a session with the elderly. There is singing, news, coffee and tea, exercises, and before I left there was even a game of bingo! It seemed a fantastic way for the community to spend their time socializing and have lots of fun. There was definitely lots of laughter and lots of singing. The elderly (and others) aren’t just lonely at Christmas and other holidays; they can be lonely all year. The fantastic thing about this project is that it provides a place for the elderly to come together once a week and spend time with others – surely there is more value in spending time with someone who is lonely rather than just buying them a present once a year.

Following this session, JayJay and Iwent to an interfaith session in Christ Church for women. It gives women from all over the local community a chance to do some fitness dancing, have lunch, chat to each other and take part in some crafts. I particularly enjoyed the crafts, and I think I surprised a few people that somebody of my age could actually sew and completed my felt heart craft quite quickly. It also provided me with a relaxed opportunity to talk to people about their lives and their struggles and their joys. One of the most fantastic things I got to see this week was how integrated the lay missionaries are in the community. They would often be stopped in the street by people just to say hello. Christ Church was no exception – people welcomed me simply because I was there with JayJay.

On the Friday I went to St. Chad’s sanctuary with Ger. I got to see the amazing work that they do there. Near Birmingham Cathedral, they are able to give asylum seekers a place to receive food, basic hygiene products, clothing and other items that people need to set up a house. Some people when they arrive in the U.K. have literally only the clothes they’re wearing, so for these people the sanctuary provides all their basic needs. St. Chad’s sanctuary also allows asylum seekers to learn English. Once you can speak the language of the people around you, then you can start to feel part of the community.

In the afternoon, I joined Rose in Solihull where a wonderful church is inviting people after their meetings with the Home Office (around the corner) to their parish hall where they are offered cups of tea, coffee, biscuits, sandwiches and other foods as well as some clothing. This parish allows those visiting a chance to rest, talk to other people and eat. Some people have to travel quite far to get to the office so it’s a good respite after a stressful day.

Having stood outside the office giving out invitation leaflets, Rose and I decided it might be an idea for me to take off my name tag and to go into the center and not talk to anyone unless they talked to me to see what assumptions were made about me. The point was to experience some small part of what asylum seekers and other migrants experience in the U.K. The first question I was always asked was “Where are you from?” Most people were shocked when I said the UK. They had assumed I was from Eastern Europe. This question made me wonder if that was always the first question people are asked, rather than “What is your name?” – almost as if the person has lost their individual identity and the most important thing about them is where they are from.

On the Friday evening, the lay missionaries invited me to a beautiful dinner to celebrate my last evening with them. We started with evening prayer and ended the evening sat around the dinner table eating cake. There was even the singing of happy birthday as it was my birthday on the following Monday. I had a very busy week with the lay missionaries and learnt so much, having my eyes opened to other people’s situations.