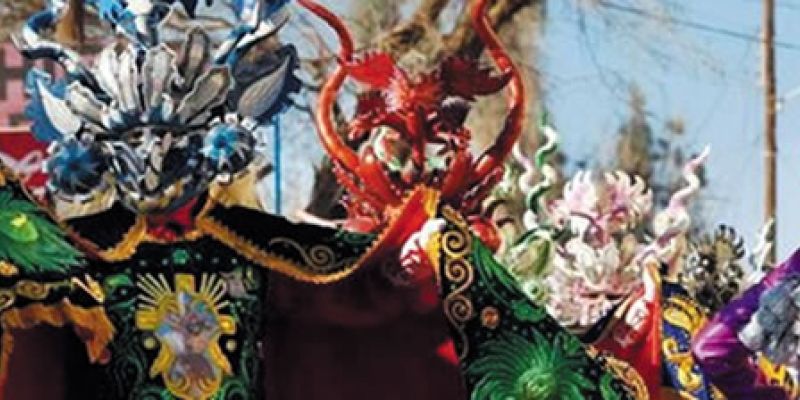 January 6, 2017, was the Feast of the Epiphany also known as in Chile as La Pascua de los Negros (Passover of the Blacks). During colonial times this celebration was a rare opportunity for the black and mestizo slaves to celebrate.

One of my roles here is to provide support to the comedor in a shantytown just a fi ve minute walk away. A comedor is a place for people to come and share a meal donated by locals. Located in Alto Hospicio in the Atacama desert of Chile, I encounter many of the challenges faced by the families who attend the comedor. Always on the lookout for activities and events that can bring the attendees together, we decided it would be a good day for a mini-pilgrimage. The destination? La Tirana a small town located an hour inland in the heat of the desert. Dominated by a cathedral in the center, La Tirana is the site of an annual fiesta commemorating La Virgin del Carmen when this sleepy town of 1,000 attracts up to 250,000 Chileans. However, a smaller festival also occurs for La Pascua de Los Negros.

The planning began a number of weeks before the event. The day's activities, transport arrangements, food, dining facilities, toilet arrangements and more all had to be organized. Eventually we had the good luck to meet a local contact who was also planning on bringing their own group to La Tirana. The contact not only arranged two large coaches from the local municipality, but also a large area to bring our hungry and thirsty pilgrims. A day's activities were arranged including Mass in the cathedral and lunch followed by activities for the children. Monica and Jorge, two hard working parishioners had cooked and boxed nearly 100 meals with the aid of two Columban lay missionaries Lorna and Gilda.

As I arose at dawn that day I thought, "Everything is arranged, what could go wrong?" But this is Chile, and the best laid plans were soon to unwind. About 40 attendees of the comedor were participating, mostly mothers, lots of children and a few men. The plan was for the two municipality buses to collect us at 8am at a meeting point in the shantytown. Arriving at the meeting spot I was amazed to fi nd the locals arriving on time because I imagined 8:00 am to mean 9:00 am Chilean time. Not 40 but 50 people. Delighted with the response, I decided to check in at the house of our contact to see how things were going. Alas, they were nowhere to be found. I also noticed only a handful of the other group had gathered. However, a family member was on site. Slightly confused, I discovered that the contact "would not be available." And the buses? The response began, "Lo que pasa es que …" This roughly translates as "what is happening is … ."

Now let me explain. In Chile, when you ask someone about the progress of something that has been arranged previously and they begin their answer with Lo que pasa es you know there's trouble ahead. What it really means is not "what is happening" but "get ready, because what you thought was going to happen is actually not going to happen." My Spanish is far from perfect, but my heart sank before he even finished the sentence.

Inquiring about the buses, I was told the buses were in Antofagasta. Antofagasta is a city fi ve hours south of Alto Hospicio. Our transport had disappeared in some mix-up that remains unexplained. "Do we have other transport coming?" I enquired hopefully. The response was an enthusiastic yes, a "micro" (minibus) for us and a "furgon" (minivan) for you. Of course neither were coming, not withstanding the miracle that would be necessary to get 50 people into a minivan. Meanwhile Fr. Miguel had arrived and our concerned faces betrayed that all was not well to the gathered pilgrims. Fr. Miguel rushed off to try and hire a bus at short notice through a local man as I broke the news to the waiting party. "Let's just wait for a while and see," I said.

It was now 9:30 am. I wondered even if we reached La Tirana, where would we feed the people. Sitting on the dusty streets of La Tirana in 85 degree weather is not an ideal lunch venue. We were assured that despite the failure of the buses to arrive, the premises was certainly available and to reassure us, a map of its location in the town was drawn. Meanwhile I saw the crowd wandering off, and I thought they had gotten tired of waiting and decided to go home. I wouldn't have blamed them. In fact, word had gone around that the minibus hired at short notice was fi nally coming, and they were going to meet it somewhere else. After another half hour of chaos, squeezing people into the bus and available cars, we were on our way. I breathed a sigh of relief.

The plan was to meet in front of the cathedral in La Tirana and go as a group to the arranged premises for lunch. What could be more simple than that? But upon arrival in La Tirana, of course no-one met us in the square. Instead half had gone to Mass which was nearing its end, and the other half were wandering around the town. Others were looking for toilets. Eventually I hunted down Fr. Miguel and asked him to fi nd the house nearby for lunch while I tried to gather the group in the square reassuring them that they will have lunch and bathroom facilities soon.

As we say in Ireland, "It was like trying to herd cats." Fifteen minutes later Fr. Miguel returns with the news that the house was locked and nobody was answering. Surprise! Now I'm a patient man, but everyone has their limits and mine had just about been reached.

The church organization in La Tirana has a small building complex near the cathedral, but we had already been told it was booked out for that day. Immediately we rush to the administration office and Fr. Miguel pleads with one of the kindly staff, who looks sympathetically on our plight and gives us access to a dining hall. I return to the square to gather the troops, once again and breathe another sigh of relief. Now we had to get the food to the hall. Arrangements had been made to meet at a certain street to carry the food from the cars. But wouldn't you know. When we got to the meeting point, the street was crowded with people due to the religious procession with all the dancers, musicians and followers. Finally after more miscommunications and misunderstandings we found the cars and hauled the food and drinks by hand to the starving multitude.

It was now 2:00 pm and we were due to go home at 4:00 pm. After lunch and satisfied stomachs some semblance of normality returned as the children were given a guide around the cathedral, the crib and a few prayers were said. The peaceful ambience of the cathedral brought an air of calm to the days chaos. The day ended with a procession to the edge of the town where the minibus was waiting to pick us up. We finished with a group photo of the survivors. However, all was not over yet. As the minibus filled to overflowing with passengers it was obvious that there were more people on the bus going back than had come. But that's another story!

Arriving back in Alto Hospicio I breathed my fi nal sigh of relief and reflected on the day. Apart from the eight hours of organized chaos it had been a very successful outing. The Chileans have a way of going with the flow, whether that is a flood or a trickle. I had my own epiphany that day as well. Do not take anything for granted in Chile. After you organize a plan, arrange a backup plan, then arrange a backup plan for the backup plan. Then maybe you've some hope of things going according to one of the plans. But always remember, you're in Chile!