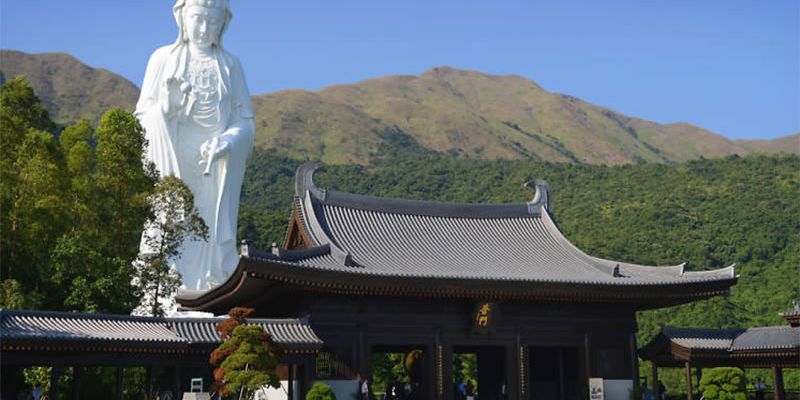 Early in September 2021, a small group of us Columbans visited the Buddhist Tsz Shan Monastery in Tai Po, Hong Kong. In this era of restrictions on our mobility it was great to be out visiting anywhere, even though the heat was oppressive. This monastery was recently constructed with the considerable financial support of a local billionaire and the focus is on outreach to youth as well as featuring an extensive array of Buddhist art. It covers a wide area and nestles into a wooded hillside with a spectacular view of a nearby inlet.

Apart from many large statues of seated Buddhas in several halls the main feature of the monastery is a huge outdoor statue of the Bodhisattva Kuanyin. The graceful, feminine features of this huge white statue are striking and can be seen for miles. In Japan it is called Kannon and similarly revered in many Japanese temples as the goddess of mercy. It is said that when Buddhism first reached Japan from China via Korea that it was the Buddhist art that attracted the Japanese nobility’s attention and religious sensibilities more than the teachings.

In the air-conditioned rooms of a modern art museum, we were first able to view a video about the main tenets of Buddhism before we moved on to observe a rich variety of statues of Buddhas from several eras and from many different cultures. The variety of facial features of the Buddhist statues were a testament to the inculturation of Buddhism into many different Asian cultures. I am aware that my sensitivity to art is limited and the nuances of the different Buddha’s expressions and postures need some research but some statues were more striking than others.

I had visited this monastery two years ago (pre-coronavirus days) with a group of missionaries as part of a diocesan sponsored Hong Kong orientation course. In that previous visit we were fortunate to be greeted by an English-speaking guide and later a local monk so that we could exchange ideas and questions about our faiths. With the restrictions on group meetings and masked conversations in play I was sorry we had missed the opportunity this time to have that exchange although the staff were efficient and friendly.