Youth March for COP26 in Fiji Stopped by Police 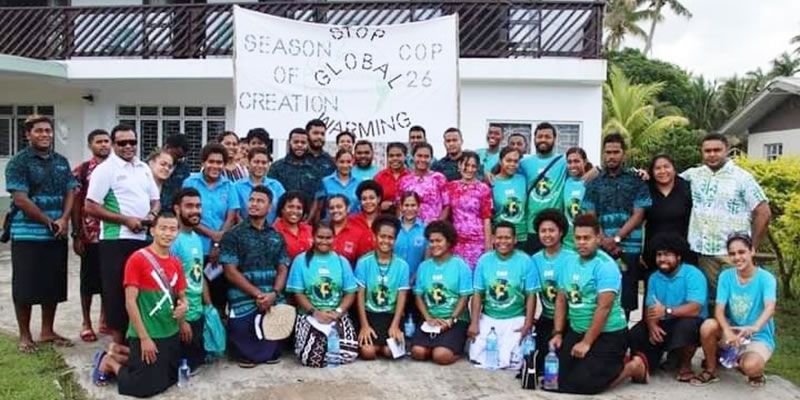 A youth march to highlight the climate crisis was suggested by Atelemo Cakaudrove, a student from the Fiji National University, Nasinu Campus, at a zoom meeting with other FNU Catholic Campus leaders.  Columban Fr. Frank Hoare was acting chaplain to the group this year.

The FNU Catholic Associations had already celebrated the Season of Creation 2021 with campus clean-ups, extensive planting projects and by a video challenge and webinar on the Climate Crisis.

The Lautoka branch was most active and creative in these events. About fifteen members travelled the five hours bus journey to Suva to participate in the march. They were accommodated for the weekend at the Columban Formation and Columban Lay Mission houses in Suva.

Early on the morning of the march a group of police arrived at the Formation house asking to see the march permit. They also asked about an activist who was to bring his parish youth group to the march. They seemed to have a mistaken idea that, because of his presence, the march would become a political protest march.

Atelemo had a permit from the Fiji Roads Authority stamped by the Suva City Council. He was told that there was no need to get a police permit since the march would be along the footpath, not on the road.

Fr. John McEvoy, Columban leader in Fiji, celebrated Mass for the students that morning. Afterwards about 50 young people began the march to join up with another group assembled about one kilometer away. As the groups met, the police stopped the march saying a permit had not been issued by them.

One of the speakers was to have been Archbishop Peter Loy Chong. He had gone directly to the park but on hearing of the police action he left for other engagements.

In the seminary hall a young Fijian lady, Adi Mariana Waqa, gave a passionate speech alerting the young audience to a coming catastrophe if the temperature rise exceeds 1.5 degrees above the pre-industrial world average.  The gathering closed with a prayer by Fr. Petero Nimilote of the Pacific region seminary staff.

The Sunday Fiji Times had a picture of participating youths on its front page under the heading “Police halt march” and reported the proceedings on page three with the heading, “Police stop peaceful march by Catholic youths.”

It was ironic that a peaceful march to raise awareness of how vital COP 26 is to Fiji should be prohibited in Suva at the same time that the government leaders of Fiji were trying raise the voice of the Pacific in Glasgow.