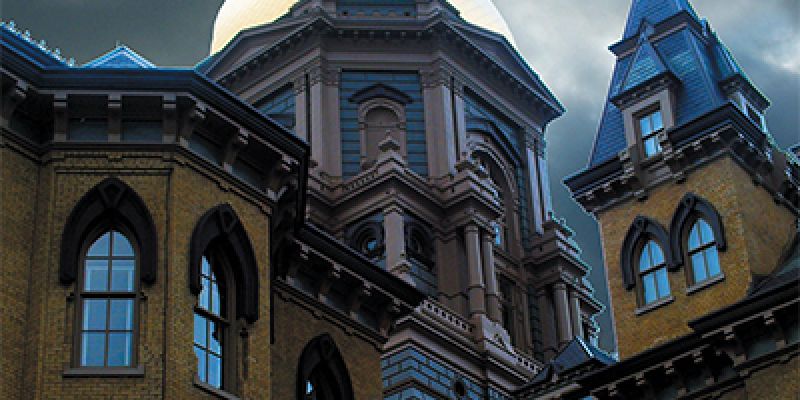 During the 122 year history of the Ladies Ancient Order of Hibernians (LAOH), there has been a special relationship with various Catholic institutions. The Order has also promoted Irish, Irish American and Catholic history.

At the 1902 convention held in Denver, Colorado, the delegation passed a resolution to establish the Trinity College Scholarship. Fundraising efforts were started immediately after the convention. The early leaders valued education and saw the importance of educational opportunities for women. The membership raised $10,000 over a two year period. The donation was given to Trinity College at the 1904 convention held in St. Louis, Missouri. The LAOH became sponsors of a grant at Trinity College that would enable young women to benefit from a good Catholic education. Many of those who benefited from this grant have given back as religious Sisters, teachers and nurses.

Ellen Ryan Jolly served the LAOH as the National Irish Historian from 1908 until her election to National President in 1912. President Jolly was a true lover of history and wanted to remember the contributions of the Catholic Nursing Sisters of the American Civil War. She recommended to the membership that the LAOH should erect a monument to honor these Sisters. The Nuns of the Battlefield Monument was dedicated in Washington, D.C, on September 20, 1924. In addition to the Monument, Ellen Ryan Jolly wrote a book, The Nuns of the Battlefield to share the stories of the various communities of religious Sisters and their service in the Civil War. The LAOH was asked to donate to the National Shrine. President Mary Timon presented $10,000 to the Most Reverend Thomas J. Shahan, Rector of Catholic University. The LAOH donated the St. Brigid Altar and other religious items in memory of these Sisters. A beautiful gift of a chalice and gold paten modeled after the celebrated Kilmallock Chalice was donated to the Shrine in memory of the nuns of the battlefield. Other items donated were a replica of the Cross of Cong Crucifix, an illuminated Missal and Missal stand made from the wood of the pews where the Sisters treated their patients.

At the Baltimore Convention in 1935, Columban Fr. Edward Galvin addressed the delegation about the Columban missionaries. Fr. Galvin requested financial support for the missionaries to assist in this important work. The delegation passed the following resolution: “We recommend that the suggestion of our National Chaplain, Bishop Griffin, that our National President appoint a National Chairman of Missions to direct this work within our ranks, be adopted. It would be understood, however, that such National Chairman of Missions work under the direction of the National President and the National Board.” National President Anna Bryant appointed Past National President Mary McWhorter to serve as the first Chair of Missions. At this Convention, the Missionary Society of St. Columban was established as the principal charity of the Ladies Auxiliary. The Columban Fathers continue to be the primary charity, and the Columban Sisters were added in 2006. The Ladies Ancient Order of Hibernians have donated more than one million dollars since the adoption of the Columbans as our primary charity.

Charitable donations and corporal works of mercy have been the trademarks of the LAOH. During our long history, we have made financial donations for many causes including a Fund for Catholic Chaplains of the Armed Forces, the Irish College in Rome, Shrine of Our Lady of Knock, All Hallows’ Seminary and victims of many natural disasters. Many churches have also benefitted from donations of vestments, Mass items and church windows from individual members and local divisions.

A joint program of the Ancient Order of Hibernians and LAOH to assist in religious vocations is Project St. Patrick. This program was started to provide financial support to seminarians, religious men and women during their formation. This project was established to continue the vision of St. Patrick “to bring the Gospel and the Eucharist to all people.”

We are proud of our history. This history can be found at many archives including the University of Notre Dame, Catholic University and the Irish American Historical Society. John J. Burns Library at Boston College has one of the largest collections of Irish History. Since 2006, this library is the archival site for our organization. The Ladies Ancient Order of Hibernians are proud that our history will be preserved at this prestigious library.